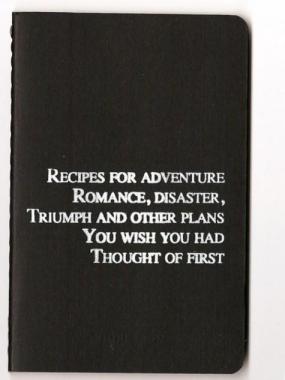 What I need to put on my journal

Lately I’ve taken to carrying my journal every where I go, whether I write in it or not. I just want it with me for that time when a thought strikes my head and I have to put it down or fear losing the idea.  However, along with having my personal ‘space’ with me and the convenience that comes from having it around, there is also the danger of someone reading something of mine that I would much rather keep private.

The only reason that came to mind, because most of the time I don’t even think of someone reading my journal, was because I came out of the store the other day and my bike (bicycle) was surrounded by a contingent of high school boys from one of the camps.  My journal lay neatly in the basket, ready for anyone to crack it open.  See?  I am quite unconcerned about where I lay my journal. It’s not wise.

Had anyone cracked it open they would think I have a very active love life.

” I was fantasizing about arriving unannounced at Stephen’s. Oh I would love to surprise him.”

“Owen… I have sexy ideas for him.”

“Tony has gained weight, but he still looks as sexy as ever… (and I won’t add in what else I said because it’s too hot for paper)”

And that was only the first 4 entries into the new journal.  Now, only one of these is actually real.  One is a character, and the other, well is just me appreciating male beauty.  Sue me, I’m a single gal with a lack of eligible men around.  A girl has got to have some fun.

I shudder to think of what those boys might have though had they flipped through the journal.  And I am sure I would shock the pants off most people with what is in my other journals that I’ve completed.  Heck, even some of them I turn bright red when I read it and go, uh wow, so that’s what I was thinking.  I go from innocuous to more graphic than I’d want anyone to ever know.  It’s my personal journal so I fill it with everything.  Literally, everything.

One time a friend of mine was talking about how she had her journal with her in her purse wherever she went, and because she liked Nancy Drew, she had taken an old cover of one of the books to use as the slip in cover of her journal.  She pulled the journal out of her purse and handed it to me to look at.  Unconsciously I started flipping through the pages before I was slammed with the knowledge that I was just flipping through someone’s private words.  I immediately slammed it shut, admired the cover and hoped that my friend hadn’t thought that I was reading her words.  I didn’t see a thing, M.  I promise!  But we sometimes forget how easy it is to look at someone else’s thoughts.  I had never thought of how vulnerable my personal thoughts were.

I still don’t think about it all that often. I much prefer dragging my journal with me wherever I go.  I just need to remember in the future that sometimes it’s more accessible than I might want.  I wonder if anyone else has felt that way.  That they like their thoughts close at hand, but if they were to ever fall into the wrong hands….. Whew, can you imagine what people might think of you?

As per the photo for this post.  Tumblr.  I adore Tumblr, on a side note, for fun pictures like this.  I like thinking that the things I write about people would be jealous and wish they had come up with the idea first.  Granted, I don’t think my ideas are all that spectacular, but hey, one can dream.  And besides, the statement on the book is accurate.  Some of my thoughts are things you just wish you might have come up with….. because they are so odd you could study me for science…. Ha ha ha.

they disappear into unknown

getting into your clothes

niggling at the brain

thoughts have a mind of their own

impossible to hold onto

they come back to haunt

creeping and sneaking up behind you

jumping out of nowhere

but there is a lingering reminder

knowing that the thought was once there

I woke with just two lines out of this poem, and I’ve been puttering away at it all day.  I had no clue it would turn out so pretty.  Enjoy

© Katie Lyn Branson and Kate’s Bookshelf, 2009-2011. Unauthorized use and/or duplication of this material without express and written permission from this blog’s author and/or owner is strictly prohibited. Excerpts and links may be used, provided that full and clear credit is given toKatie Lyn Branson and Kate’s Bookshelf with appropriate and specific direction to the original content.