New Year’s Eve brought me to another banquet, though this was more of a very nice tasting menu. I have done several party type meals with this restaurant, and all usually involved yelling, crying, and broken glass. From someone, though I was usually the one crying. Yeah, so when I knew this was coming up, I was excited albeit, a bit aprehensive. I don’t do well under mad pressure. Meaning mad as in crazy and mad as in pissed off.

This was the farthest thing from that. This was amazing. This was exciting. This was a step towards a brighter future and opportunities that I have only had a glimmer of seeing with online postings from chefs. This was new. Apropos since it was leading into the new year.

The menu was in my opinion, ambitious. I can’t say what Coffeeman thought, though he did say something in regards to New Year’s meals and whatnot.

I was in charge of the desserts. Ta da! Of course I was, though due to a very busy week I was never able to actually make the triple flavored mousses that filled the cannoli shells. I was semi bummed about that, but since my cranberry sauce was used for the appetizer, I can’t complain. Chef could easily make it his way. But he has kept it with my recipe. Thank you. I am honored. It’s pretty cool to say that your lemon bars and cranberry sauce are that; yours. (on a side note, right before calling in sick, I made bourbon caramel sauce and a beer cheese sauce that were perfect in my opinion. Ok, I couldn’t taste them, but everyone else said they tasted good…. I think I am starting to get the hang of this cooking thing where I don’t jump at my shadow and I just make)

The New Year’s Bash went off as a hit, which included a round of applause from a very nice group of people. Several Instagram worthy shots and a closer connection with some of my coworkers. I went home on a high that lasted all that night until the next day when gosh darn it, I felt a virus hit at the tail end of getting rid of another one. Thank goodness it came on a slow week.

Below are some lovely shots of some of the items we served for the meal. And head over to my Instagram account if you want to keep updated on other food related items, or dachshund love.  Kate’s IG  https://www.instagram.com/katielynbranson/ 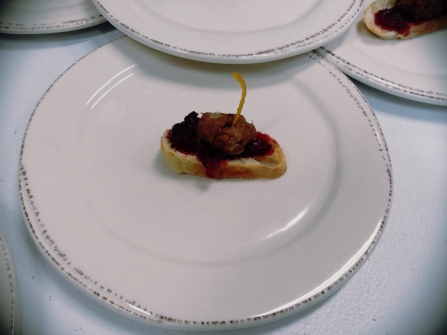 The ‘red’ is my cranberry sauce

nummies in my tummies

Jackson Pollock ain’t got nothing on this painted canvas

Pastry chef and one of her bestest gals

Anyways, Coffeeman has no clue how much I actually wanted to cry because it was so amazing. The last banquet/dinner I had to do involved 60 cakes in 3 hours with no prep and a boss that I am possitive to this day, wanted to break me. He didn’t. He didn’t win. I succeeded and goshdarnnit! I will keep succeeding. Like all things in life, you have to fight for what you want, even when sometimes you don’t know what it is you want. You just keep fighting. And good things will happen.  Well, this is a very good thing.

Two posts in one day. Wow, well, being sick leads to ideas. I have been writing some fiction but I have lost a little zing of that since the last fiasco, which is a bit depressing. I have too much inspiration in my daily life and I want to write about it, but now I sit there wondering where or when I should share it. Le sigh. Such is life.

But this might all be the cold/flu talking and being tired and loss of perspective. Let me just go back to hela good banquet.