I am tired. Tired doesn’t even begin to express what I feel. Exhausted might be a better word.  No, I don’t usually work a 40 hour work week, and I’m definitely not a workaholic like Coffeeman, though a part of me would like to be. That being said, I am exhausted. Mentally, and a bit physically.  I feel like I’m in a losing battle. Chef and I against the world… Okay, well he has William too, I forget about him as he’s so quiet!

I feel like I am not seeing the light at the end of the tunnel. The last few weeks have been tiring. Good at times, but tiring. This weekend was especially so. While the flourless chocolate cake was marvelous, the rest of the work days could be shot down into a sewer, which is ironic because I dreamed I needed Chef to come to the walkin and he said he wouldn’t step foot in that sewer( he laughed when I told him about the dream) 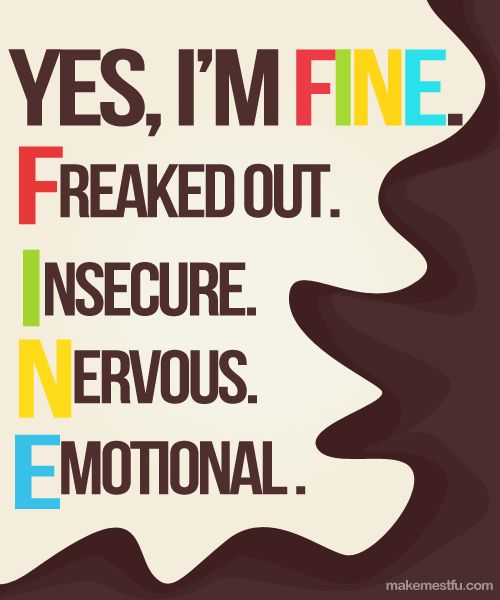 I’ve also heard ‘f***ed up, insecure, neurotic, and emotional… This is the polite one.

My blood sugars have been too low during service. I am down my backup guy, with two very crazy days of service and no time to eat a proper meal.  Coffeeman asked me if I was okay the other night after I dipped down way too low… I said I was fine. What is fine….? See picture. That was me. It was so crazy that one coworker who always calls me Miss K, pulled me in the back when I was having a tearful meltdown to let me breath some of her Young Living stress reliever. I have got to get some of that. It helped. And our hostess who is the literal translation of Awesome, Superwoman, Extraordinaire, came to my rescue with a tall glass of water. (She knew when I asked for it, something was wrong, then finally when she found out I hadn’t eaten, pestered me for the next half hour to go eat something, even the chocolate cake, “you deserve it!” she said.)

Thank god for Coffeeman. I mean, I know he’s the Chef, boss, all around good guy, but he came up on the pizza line and helped me knock out a crazy amount of dishes because I had gotten backed up. I was in tears. It had been a bad day coming in to work and finding out the kitchen was not up to standards because my dishwasher/closer and I had a disaster with cleaning the kitchen where the two of us could not see the way flour spread all throughout the kitchen floors because water makes flour disappear…. Someone said it looked like cocaine had been dispersed through the whole kitchen. 2 Which is probably why it ended up on counters over the night cause they were spotless when I left…. I was so so so so so frustrated. I was nearly sobbing up on the line. I know a lot of it was being tired and also knowing/feeling that one of my coworkers bitched because I had told that person to do their prep as it has not been done for quite a while. Yeah, I was really annoyed on Friday night. Yeah, I let the anger build and I was not nice with the note.

Throw in the mistake with the kitchen floor, and boom, it was not a good Saturday. Even if I had the second chocolate cake turn out well. And having a down coworker because he got sick.

It all added up to just a kind of crappy weekend. I felt like I was punched in both eyes by the time Sunday rolled around. Bruised body, heart, mind. I don’t know how you are supposed to always bounce back from that.

I try really hard with this job. Sometimes I think I try so hard mistakes get made because I’m trying so hard not to screw up. I’m more brave than I used to be, but in a lot of ways I think previous bosses made me doubt my existance. I doubt what I can do all the time. What would anyone see in what I have to offer? Am I worth keeping around. I know I know, I am worthy, but I still doubt my existence all the time. I am at heart a very insecure person. I just don’t always see what other people see. You could tell me a hundred times and I still my doubt your words.

I don’t like it when my sugar goes down. And I really need to do what my parents told me to do after I relayed the weekend. They said, go tell your Chef you need him to man your station for a bit so you can go eat. Yeah, I know I need to do this, but I hate, hate, hate to ask for help. I know that I need to do it, but it makes me feel like I am not capable of handling myself in this job. Shouldn’t I be stronger? Shouldn’t I be able to hold it together even if I have a lot of health issues?

I am trying to be a strong independent woman. Twin named Bear, always has a goofy saying about that… Well I’m trying! But not feeling like I’m succeeding too well.

Is there a light at the end of the tunnel? Will the kitchen ever run more smoothly than it is right now?

I don’t know, and honestly the last few days of the month couldn’t come any sooner.