Large healing bruise on my knee. I still have no clue where this came from.

I am naturally a klutz so it’s actually pretty easy to figure out the first three of this list.  In this job I have sustained several bumps and burns, but bruises are the thing that get me the most. At some points I have had 10+ bruises on various parts of my body. Mostly my legs, but some really odd ones on my arms that I sit there wondering where the heck I have received them.

Currently, I have had more bruises due to being slightly more self sufficient after an incident with Lucifer about a month and a half ago. Gads time flies, I had forgotten it had been that long.

There I was needing something up high and as he walks by I ask him to reach it for me since he has several inches on me and a long reach. (I, and several coworkers, are vertically challenged. Or we are short people working in a tall kitchen. Or we have short people problems. You pick.) Instead of reaching it for me, he tells me to go get a stool as he’s too busy (he wasn’t). So I go to get the step stool and he calls me back an says “K, I’ll show you how to get this.” He reaches up, inches the pan holding what I needed, tart shells, forward and pulls down the shells. Just as he hands them out to me, he whips it away and puts it back up and shoves the pan back and walks off saying, “Now you know how to get it.”

Needless to say I was pissed beyond belief. Another sweet, darling coworker saw the whole thing and reached up and got the tart shells for me, the dear she is. But after that, I started finding ways to reach for things myself.  Coffeeman has even told me he will get something for me if I need help, that he’s not that cruel, but I find myself not wanting to bother people after the Lucifer incident. So needless to say, I have a few more bruises than usual as I bump into things a bit more. 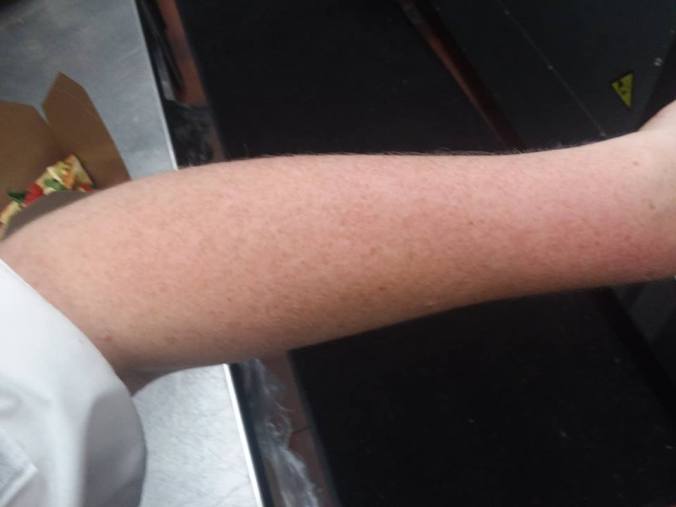 It’s hard to see, but about 8 inches of my arm from wrist up have a ‘sunburn’ from the ovens tonight

The burns are a guarantee working in the pizza station and with 700 degrees. Tonight I got a bit of a sunburn-esque mark on my arm after a minor disaster involving a pizza that stuck to the stones. Coals had to be brought out and spread over the mess and I had to shift wood around.  The guys at the bar were watching me fascinated and wondering what had happened. (man, guys are fascinated with me working pizza. It’s flattering)

But there have been oil burns, pan burns, singed off fingerprints when I grabbed the paddle for the pizza oven and forgot that the handle was hot…. Ow.   Hot cast iron pans, melted sugar. Surprisingly enough, I haven’t gotten that many burns in the scope of what I’ve worked with.

And lastly the last part of the title. Body. I can say one thing, if you move in a kitchen, and by move I mean don’t dawdle, you can get a body. The lifting, the walking, the chopping, everything. It builds muscle like no business. My arms are in the best shape they have ever been. I hardly have any excess fat now, having shed it with everything. I dropped 10-12 pounds of weight and gained so much muscle. I’ve had some of the servers go “wow” when I take off my chef’s jacket and they see my arms. Or like this summer when I came in in my heels, short shorts, and camisole top. They were like, “Sheesh, you have a body!” I do, and it’s so great. I love it. It really makes up for some of the exhaustion I feel. (the exhaustion might be the 48 hour work week last week)

But there’s a lot of B’s to this job. And I love knowing I have a body under my very conservative chef’s jacket.  It’s part of the reason I wrote a poem back in the spring about “You Can Be A Nice Girl and Wear a Black Bra”…. it went along the lines of, ‘under this white jacket you would never know I wear black lace….’

It’s fun, I had fun with that poem. I should hunt it down and reread it again.  I have a lot of kitchen poetry. I feel this post would make for a great poem. I should work on that this weekend when I go to writing.