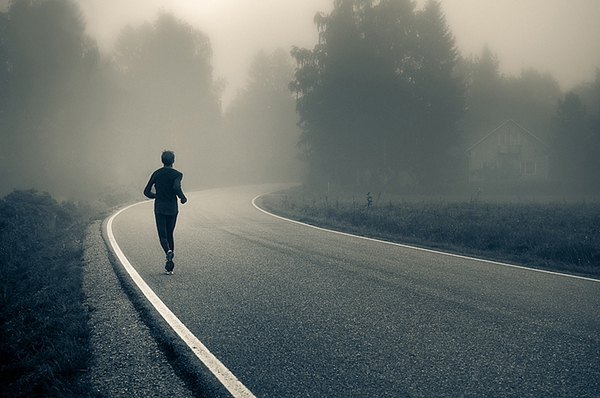 Twenty-six. That’s how many songs were on his playlist.

Twenty-six. That’s how old he was, give or take a few months or days.

Twenty-six. That’s how many miles he was training to run. Miles he would run in a marathon that was taking place on his twenty seventh birthday.

He smoothed his hand over his freshly shaved head before putting in his earbuds, turning on his iPhone, and going to his playlist.

Morning, before the sun came up over the mountains, when the air was cool and fresh, was when he liked to run. His feet would pound the pavement in an ever repeating rhythm as he ran through the quiet streets of his neighborhood. Mini-vans and cars silent in their driveways. Sprinklers on their automatic timers watering emerald lawns and sidewalks, the excess running into gutters. It was a world of another world. The inside of a snowglobe before you shook it and all the snow or glitter sprinkled down. It was his and his alone. He could relish the peace of the moment as he ran, stepping into this world within a world. Forgetting for a moment his life that was waiting for him. Forgetting the uniform he put on every day. The uniform, where the minute he put it on, he became someone else and people regarded him differently.

He could forget his life as the music washed over him, as he repeated the same mantra over and over. Twenty-six. Twenty-sic. Breath in. Breath out. One more mile. One more moment of himself.

He turned the corner of his street and saw his young son sitting on the front step of his house. Gloria, the next door woman who watched his son when he went on a run, was drinking her coffee as she stood next to his boy.

“Daddy!” his son called and the world in glass faded away.

All that mattered was his son.

This was a prompt from  The Daily Post. Daily Prompt: Your Days are Numbered. The prompt being to use the number 26 as a role.  It’s funny how a post can start off one way then have a mind of it’s own and just go from there.  There was nothing specific when I started this other than twenty six sounded like a nice long playlist. Then I pictured a man running in the morning. Then the man had a shaved head.  And suddenly the whole story morphed to being for someone and about someone I know. This is just for him and he is going to get his own copy in the mail.  Hopefully he doesn’t read this on a regular basis because then the surprise is gone.

It always blows my mind how a story can come out of just one thought.  How plots and characters just grow into a story.  Well, this is for someone I would like to call a friend.  And for all of you to enjoy.