A bit of flash fiction for you, my lovelies.  You know I love throwing out bits from my characters, as I seem to do it on a more regular basis.  This is about my two main gals, Rena and Mia.

After longingly staring at one of our local police officers who I swear looks like the actor William Levy from the back, and thinking about Mr. Statham, who happens to be a police officer, I came up with this little piece.  Enjoy you all on this lovely October Friday.

I don’t have the patience for finding a back picture of William Levy, so this’ll have to do. 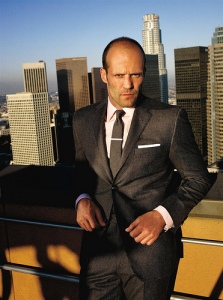 Jason Statham in a suit

Rena stacked her books and grabbed her Americano as Mia held the front door of her store open.

“Think that will last you a couple days?” Mia asked.

“It should.  I will probably have them back to you by the weekend most likely.  Thanks for loaning them to me.  Oh, hello, Rafe,” Rena said with smile at the tall Scottish man.

“Rena, love,” Rafe smiled, but arched a brow at the books she was holding.  “Quite a stack you have there.  Plans to read a bunch?”

“Oh, I have some research to do and Mia always loans me some of her books.  Besides, one can never have too many books……,” Rena’s words trailed off as the Police Chief’s black cruiser drove slowly by the shop and parked at the police station next to the city building.

Mia frowned at Rena.  “What are you staring at, Rena?” she asked then made an agreeing sound of pleasure as she followed Rena’s gaze.

“Jason Statham,” Rena answered with a feminine sigh.  She bumped Mia’s shoulder in their typical friendship move then leaned against her a bit as both women looking longingly at the officer who stepped out of the shiny black car.

Rafe, startled, looked at both the women.  “The actor?”

“No, but he looks just like the actor so that’s what all the girls in this town call him.  See?” Mia answered absently, then jerked her head in the direction of the man dressed in his police gear.  The man seemed oblivious to the stares from several women around Main Street as he grabbed several things from the front of his car.

Jolene Baker, the city clerk, stood out front of the city offices watering the pots of vibrant fall mums.  Her watering can was poised over the overflowing pots as water poured indiscriminately all over the sidewalk.  Up the street at the deli on the corner, two high school girls were overcome with a fit of giggles as they watched the handsome man.

Rafe looked back and forth between Mia and Rena, then at the women in town.

“Is this a common occurrence?” he asked.

“Hm?” Rena asked.  She reached up and fluffed her hair in the universal gesture of a flirting female.

“Does town stop dead when he’s around?” Rafe asked again.

Mia glanced at Rafe then laughed.  “Pretty much.  At least all the women stop dead.  Town’s a bit quiet today, so I’m only counting five women staring, not counting me or Rena.”

“Five? Who are the other two?” Rafe asked and looked around.

Mia jerked her head at the hairdressers three doors up where two more women were standing at the open screen door.  “Shawna and Louise Pratt.  Shawna’s the hairdresser and Louise is old enough to be his mother, but honestly, who wouldn’t look at that?”

“As I always say, ” Rena said, “Jason Statham has it made.  Men want to be him and women want to be with him.  Chief Harte is no exception.”  Rena sighed and turned  to Rafe as Chief Harte stepped inside the station.  “And if you think he’s all we get to drool over, you should see Officer “William Levy”.”  Rena made air quotes around his name.  “His real name is Jeremy Ross, Officer Ross, but he looks just like this super sexy actor who was on a reality dance competition show, so that’s what I call him.  His assets are just divine.  Ooh la la, il est tres magnifique.”  Rena kissed her fingertips in a completely Gallic gesture.

“The sad part of it all is neither one of the officers notice any of the available women,” Mia said with a pout.  Then she had the grace to look chagrined at Rafe’s raised brow.

“Okay, I don’t actually mean me because of dating Phil, but I can appreciate.  Just like I can appreciate how you look.  I’m talking Rena here.  She’s been making eyes at him all summer and he doesn’t notice one whit.”

“Who, the Chief or the officer?” Rafe asked.

“Either one,” Rena said with a sigh.  “Well, I must be going now that he’s gone inside and will be there for a while. No point in waiting around for him emerge again.  By Mia.  Rafe.”  Rena waved and marched off down the street towards her car.

Sorry that was a bit of a longish piece.  But I hope you all enjoy it.