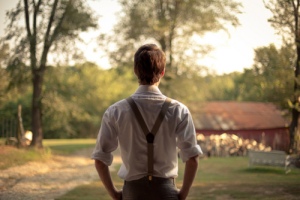 He stood on his front porch surveying all he owned.  It was a small working farm his grandfather had left him.  It had been  in severe disrepair when he had first stepped foot on it three months ago. Buildings in need of paint, lawn almost waist-high grass, a road in need of grading and possibly new gravel.

He had stood, staring in shock and dismay at the total dilapidation of everything. How in the world would he ever get it fixed up?

Now, three months later, the place was starting to look cared for.  While the house and barn still needed painting, the old peeling paint had been scraped away, awaiting a fresh coat of paint.  The lawns were mown, though there were bare patches where weeds had been pulled.  Wood was piled high near the barn waiting to be stacked.

Yes, everything was at peace and in its place.  He stood in his shirtsleeves surveying his domain.

Flash fiction time.  I’ve been inspired by Little Slices Of Awesomeness, a Tumblr blog that I have fallen in love with.  I think I could write a piece for almost every picture that is posted.  Check it out, I promise you won’t be disappointed.