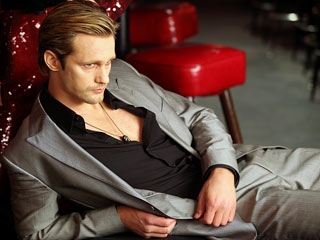 And yes, my Luke wears this outfit. How could he not?

This is a character profile I did a year ago after seeing this gorgeous picture of ‘Eric Northman’.  I just had to create a character for something of mine and I honestly have fallen in love with Luke Greyson, even though  he’s not even fully written. Nor is his story.  But someday.  Who knows.  At least I know his heroine.  Though her story isn’t really written either.  Least she has a name.  Regina Black.

So here is his profile.

Who is Luke Greyson?

Luke Greyson, age thrity-five is the son of Peter and Marjory Greyson of New York.  Grandson to Franklin Greyson, a small hotel owner.  Luke, an only child, was raised going to private schools and living a somewhat pampered life.  Went to New York University, majoring in business and hotel management as he was expected to take over the family business of running hotels.  His grandfather passed away while he was in college, so Luke was left one of the five hotels Franklin owned along the Atlantic coast.  The rest passed on to Peter who was already managing three of them.

His mother, Marjory, passed away when Luke was 30, and it crushed him as they were close.  Luke was never close with his father, who  was always focused on his hotels.  Luke needed a change and a new start, so he moved west and purchased the small hotel in Ashland.  He has been improving the hotel for the past four years.

His employees respect and admire him as he is an honest, hardworking boss.

Luke can be a bit selfish at times since he was an only child.  He thinks things should go his way and gets impatient and annoyed when they don’t.  Sometimes he tries to manage people  getting them to doing what he wants, but he’s never cruel about it.  He just likes things his way.

In his spare time he enjoys good food and wine.  He has branched out and is part ownership in a small vineyard and winery in the hills outside Ashland.  He enjoys the plays that are at the OSF(Oregon Shakespeare Festival).  He has a taste for jazz music, but enjoys all forms, though he’s not one to have it playing in his office even when he’s on his own.

His tastes in books run to murder mystery, but on the occasion he does read some biographies and non fiction type books.  He always reads the Wall Street Journal at 4 in the afternoon when sits in the hotel restaurant for his afternoon cup of coffee.

His quarters are in one of the two suites of the hotel, on the top floor.  A suite that is stylish and classically decorated in muted shades of tans and browns.  The one difference is the large flat screen television over the gas fire place.  He enjoys watching tennis, golf, and the occasional basketball game.  Though he’s not huge on sports.

He works out in the private gym of the hotel.  He also runs occasionally through Lithia Park.  He’s not bulky, but he does have a nice physique.  Defined muscles and form.  He’s in good shape.

He appreciates a good woman, and has dated some throughout the years, but due to the schedule of running a hotel doesn’t leave much time for going out.  And he hates golddigging women, which many are when they find out he owns  a hotel.   Women find him attractive and occasionally he finds himself with women throwing themselves at him.  He likes a strong woman, but not one that isn’t a lady.  His ideal is someone like his mother who managed the house and sometimes the hotels with an ease that spoke of her strength while never sacrificing her femininity.  Smart feminine women intrigue him.  He appreciates a woman in a nice pair of heels.

He drives a BMW convertible in slate blue.  He also owns an Audi A8.

His business plans are to possibly purchase another hotel in a smaller area like Ashland, but he’s still not sure.  He is enjoying being on his own and running the small hotel and getting to know his guests that return.

So, you all think this is something good?  Well, I’m partial to it.

Fire Eyes in the Dark